Cruce APK is one of the best Game card app. Play Cruce, the most popular Card Game!. It has been download 387973 times on Google Play and submitted by PL Solutions.

Here, you can download Cruce for Android using two different ways: install directly from Google Play or download the Apk file of Cruce . 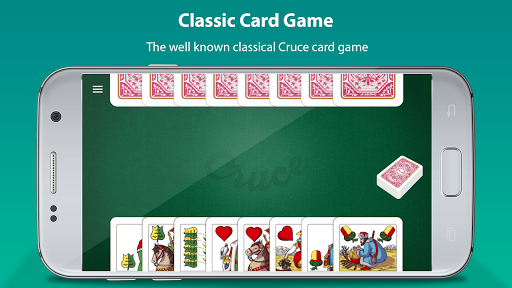 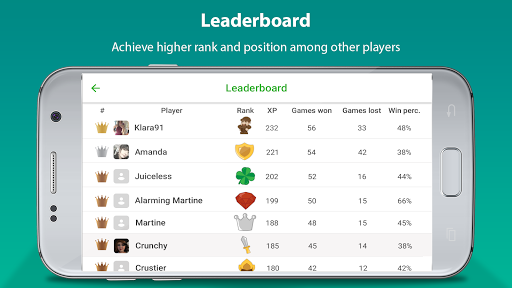 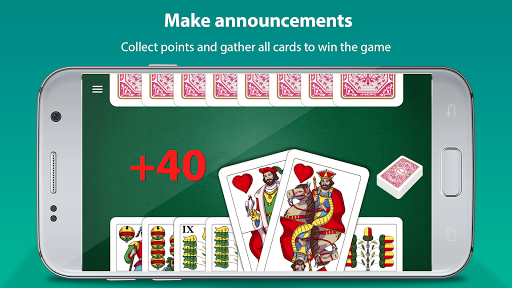 ★ It is a very famous card game in Transylvania (north-western Romania) named Cruce (Cross). The game is often played in other countries: Germany (country of the province of the game), Hungary, Austria and Slovenia, but the game has a different name (also named 66, sixty-six) and also the rules of the game is different.

★ The card game is called "Cruce" and it can be played by 2, 3 or 4 players. Within this app, the maximum player number is 2. You can play against the computer. The cards are Hungarian cards and the "Seven" and "Eight" cards are removed, leaving in total of 24 cards. You can play against 3 different computer players. Each player has a difficulty level. The player who reaches first 15 points will win the party. In case of equality the game will continue until one player make more or less points than the other.

There are in total 4 different card types: HEART, LEAF, ACORNS and BELLS. Each card type has 6 cards with different values.

★ When the game is started, the deck of cards are shuffled and are distributed among the players. Each player receives 8 cards and 8 cards remains on the table. Each player evaluates their cards for the auction. The player who's turn must make a bid between 1 - 4. If he thinks that his cards doesn't worth 1 point, then he can bid: "PASS" and will give the bid possibility for the opponent player. If the player makes a bid between 1 - 4, the opponent player can make a greater bid and will win the auction. The maximum bid is 4 and the players can't say a greater number. The player who "wins" (by the highest bid) the auction can place the first card. When the first card is placed it will define the tromf (master) card type. This card type is the most powerful within the current game and can take any card with other types. In case of the same tromf cards are placed on the table, then the value of the card is evaluated. The card with the greatest value will win. When there are no more cards left, each player will calculate their points and will result the end of the game. The points are calculated by each player by the sum of their collected cards and announcements. Finally the total sum is divided by 33 to get the number of points. If the player who won the auction made less points than his bid, then he will lose the points. Each accumulated point is added to the player's existing points.

★ Before the game begins each player must evaluate their cards and make a bid at the auction phase. The players can bid between 1 - 4 or "PASS". The bid are calculated by multiplying the bid value with 33. It means that the end of the game the player who started the game must have this accumulated points, otherwise he will lose the points (the bid value). The player who wins the auction can start the game, letting him to place the first card and define the Tromf (master).

- We're constantly improving the app and the overall performance

Yes, You can download the APK file for Cruce 2.5.8 from APKDAD. Please note: Cruce - Game with Cards APK is the property and trademark from PL Solutions, all rights reserved by PL Solutions.

1. How can APKDAD guarantee 100% security for Cruce - Game with Cards Apk?


2. Can I update the Cruce Apk from the Play Store when I install APK from APKDAD ?