Belot.BG APK is one of the best Game card app. Play Belote, Santas, Blato (3-5-8) and Backgammon in one place! Play Cards Online!. It has been download 842312 times on Google Play and submitted by Casualino Games.

Here, you can download Belot.BG for Android using two different ways: install directly from Google Play or download the Apk file of Belot.BG . 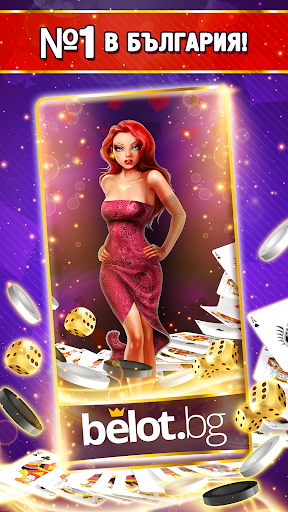 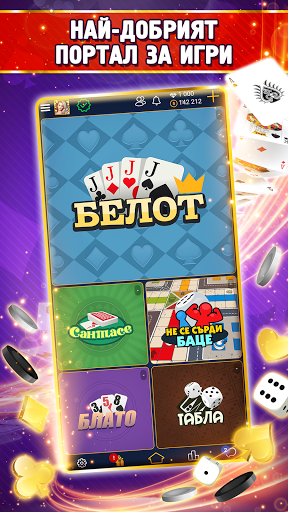 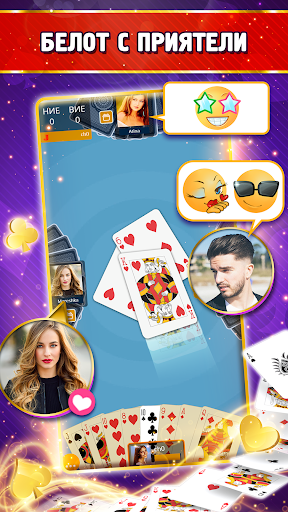 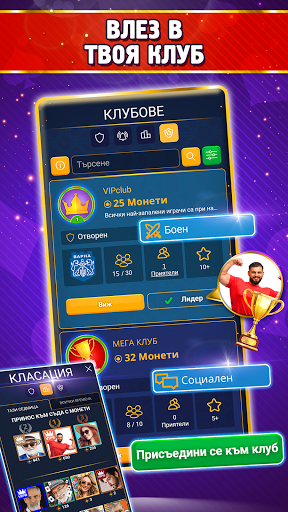 Besides your favorite game, Belote, you can now play and Don't be angry, man, Swamp, Backgammon, Santa, completely free in the same application!

Play Don't be angry, man , Swamp , Backgammon , Santase and Belot on one place!

We work hard to support everyone's favorite board and card games. Game Don't be angry, man, Blato, Backgammon and Santase 66 are the new additions to the most successful card game in Bulgaria - Belot BG.

Lots of new features and improved gameplay await you!

When entering BelotBG, choose which of our five games you want to switch to - Belot, Don't be angry, man, Santa, Tabla or Blato. Each of them has its own rooms and tournaments. We added real-time conversations in the rooms with friends, 3 day missions, "Knockout" elimination in the tournaments.

♠ Prove that you are the best in tournaments and grab the grand prize!
♠ Knockout eliminations in tournaments.
♠ New daily missions.
♠ Play with real opponents and win new friends.
♠ Talk to everyone at the table in real time.
♠ Become a part of Club! Create a fighting or social club, be a leader!
♠ Free chips every day.
♠ Save progress regardless of the device.
♠ Interesting rankings divided into categories.
♠ Play vertically and horizontally on the unit.

Play cards and win new friends in the most social game of Bridge - Belot in Bulgaria! Belot.BG is a multiplatform game Belot, which you can play online, on a mobile device, on Facebook and on Smart TV.

? Strongly social element in the game ?

Unlike the traditional game Belot, Tabla, Ne se sardi, choveche and Santase, Belot.BG has a strong social element in the game: chat, gifts, etc., for the greater pleasure of the players.

"What is Backgammon?"
The board game, Backgammon, is designed for two people. The game board is divided into 24 elongated black and white triangles called positions. They are located in 4 different quadrants - each player's own field, or home (white house and black house) and two outside fields. Each participant starts the game with 15 checkers. In addition to straight backgammon, you can also play cork.

ЕWhat it is Don't be angry, man! (Don't be angry, DAD) ❓
Don't get mad, man, it's played by two or four players. Everyone has 4 pawns of the same color, and with only 6 thrown he can get them one by one in the game. Their movement is according to the number of dice from his next roll. The winner is the one who first puts all his pawns to the triangle of his color.

Belot.BG does not stop developing! Expect the upcoming versions, in which we will continue to surprise you and improve the quality of the game.

? Real Belot fans? ?
Your opinion is important to us! Write to us at [email protected] or on Facebook - www.fb.com/play.belot. Each proposal will be evaluated and used constructively to achieve the best Belote in Bulgaria!
Read more
Download APK


2. Can I update the Belot.BG Apk from the Play Store when I install APK from APKDAD ?